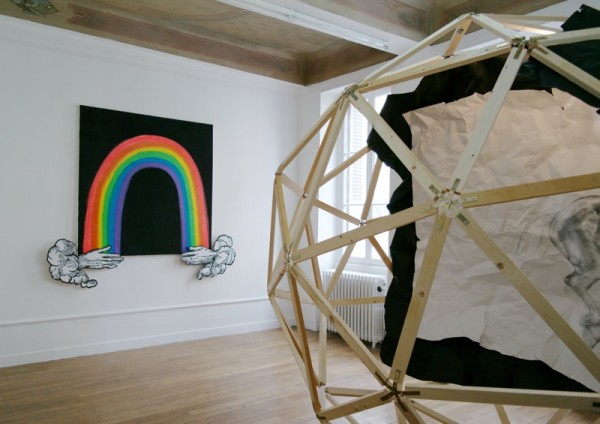 Why leave the US ?
After studying I was trying to figure out what was the best place to live, work and lots of my friends were moving to NY – of course – but NY is so expansive to find a place to work, just a studio/atelier… To afford that you have to work another job so i though it would be nice to go to Berlin because the rent is pretty low. But the reason I stayed is because of the people, they’re amazing, it’s a really welcoming community. The first week I was there, people were introducing themselves, inviting me to visitors’ studio and meet their friends, that’s something I didn’t encounter in the States at all.  More often, there’s some kind of competition between the artists, « these are my curators… » but in Berlin they’re just like hippies, and I find it very attractive.

So why did you do your Master’s degree in London then ?
I was doing a lot of writing and research in addition to my regular studio practice, but I wanted more of a challenge on that particular aspect. I wanted to write a dissertation and most of the art schools in Germany are just focused on the studio practice and i looked for a place where i could write and that was at the Royal College.

Tell us about your studio in Berlin
It’s in this neat old factory building called the Kunstfabrik and it has got almost 50 studios inside. One wall of my studio used to be part of the Berlin Wall so it’s filled with history. I do most of my work there but a lot of the stage projects that i do for theater performance/ stage design are done outside.

Your work in general and this particular exhibit always refer to many different historical references from Dürher drawings to old ads from the 50’s… Why such a big mixture of all these periods of arts ?
These are all the voices in my head I guess, when I’m working. A lot of things i’ve just gathered over the years and they’ve become part of the visual language that I use. For examples the clouds, which are from an early Renaissance period, they’re reocurring elements : they work on a graphic level when you need black and white contrasts but for me they’re also, in terms of my overall narative, a lot of the collages reflects that discussion I’m having about our perception of nature, and how basically we use nature in our life. These industrially produced images, the beginning of the printing press until now, which is what made collages possible… But it also changed our use for nature and we can do so many things in the city and never have to go to the country side now.

A lot of the things we know about nature, we’ve learned through printed material and through the industrial representation of it. The cloud becomes that decoration and I use it as a metaphor for the decorative use of nature as a motif. Same with horses, they do come up a lot. They’ve been bred and domesticated for centuries to be strong work-animals and now they’re pets, they have no purpose anymore. Horses are pets, they’ve became a hobby, it’s pretty amazing how our perception of nature has changed in that way.

Horses are so visually powerful and they were shaped that way, in the wild they would never look the way they look as domesticated animal. It’s even more bizarre.

So it is a reflexion on how all those objects, things from the everyday life we’ve shaped, forced to adapt to our way of life ?
Yes, and there’s another motif I’ve been using, but not in this exhibit, it’s the birdhouse which is the most silly object ; it’s shaped like a house though birds are one of the species that actually build their own house and it looks nothing like a « human house ». For the first time in history there are more people living in urban areas than in the countryside and that’s when the birdhouse was invented. And we made it look like a human house so we could have nature come to us.  We could now fit it in our picture of what nature should be… and they’re absolutely adorable, charming little objects, birds use them which is even more strange. That’s a happy-sad, tragic but cute thing. It’s not just a criticism, it’s also a celebration : I don’t feel ashamed of this. What about the title of the exhibit « That’s how strong my life is » ?
It’s a song from Otis Redding, a beautiful soul song from the 60’s and it’s every cliché, there isn’t a line in the song that you haven’t heard a thousand times in any other song. I had been thinking for a long time about originality in artwork and I was trying so hard to avoid clichés –that’s something they teach you the whole time you’re studying- you have to be orginal and thoughtful. And of course, there’s truth in that but there’s also truth in clichés, that’s why they exist.

I started to think about rainbows, the way we put them up in a child’s bedroom, in a classroom, a gay disco…It’s totally not something a painter should thrive to paint…

It’s the same with this song, the whole « I’ll be your sunshine, when the clouds come … » and it moves you, you feel it when the right person sings it. And I think to an extent, that’s also the purpose of art sometimes, to be able to move most people.

This title really suits with that type of work where i’m trying to deal with this sort of honesty, just not caring that it is a cliché.

Do the artists in Berlin get some financial support from the state ? Or is it mostly private, like in the United States ?
I guess I’ve been lucky in that way because I have been working on some sponsored projects and the theater works is alway financially a relief to do because the end product doesn’t have to be a commercially viable object, it just has to work on the stage for the performance and you get a pay check ! laughs. Whereas with the galeries and museum shows I do end up investing a lot of the money that I have saved doing other works but I’ve been lucky to have worked with some great curators and galerists who have allowed me to live from my artwork.

I’ve definitely did tons of jobs on the side, anything to get the money to have the studios. Childcare, working in restaurants, translating… but only short term jobs, only jobs that I could quit because the projects are always more important. Laughs.

You’ve done exhibits all over Europe and even all the way to Korea, do you always travel along with your artworks ?
Not every show, but most of the time. The museum director from Korea saw the work in Berlin, love dit and wanted it in a show but it wasn’t finished. So after I finished it, I had to ship ot overnight. I made this big wooden house that was maybe 15 m2 inside and I had to send it with Fedex which was totally insane. He flew me out there because it was very complicated to rebuild, plus I needed assistance because it was such a big structure. So he hired some constructions workers to help me build it and the interesting thing was that they don’t use wood that much, it’s mostly stone and steel structures, they don’t have the bungalows like the ones in Germany so they were pretty puzzled. So I had to have a translator on the construction team…

So I always try to go and install the show, to me it’s the best part.

What would you say to our readers to entice them to come and see the exhibit ?
Hum… Laughs… I don’t know. I was talking to another artist who came by earlier today and he teaches adult classes for drawing and they’re not professionnal, they just want to do that on the week end and he’s saying how much he appreciates explaining what he does to normal people. And it reminded me of this janitor who came through my old studio building in America and he was this older man who would come to pick up the trash and I always loved asking him for his opinion. Because all of the professors of course we’re speaking about Modernism, Formalism and he would just say « why did you draw that upside down ? » laughs, and I loved that ! I think that’s an important part of my practice too, I try to make works that can hopefully speaks to anyone on a new level. I try to make the work that I want to see, this is the stuff that is missing in the world so I’d like to think that people can come and appreciate it on lots of different levels.