WE DID AN INTERVIEW WITH SARAH LIPSTATE, NOVELLER 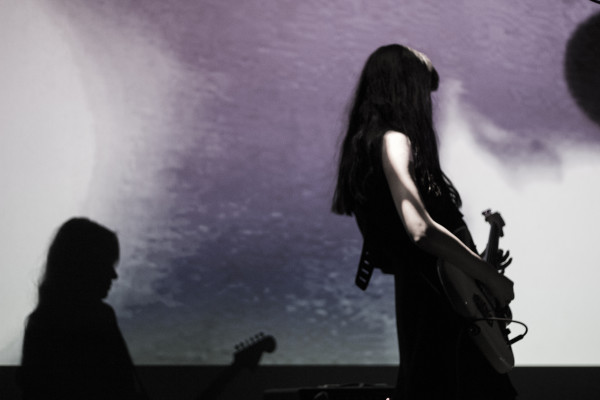 Noveller is the experimental project of the american Sarah Lipstate and her Fender Jaguar. At 30 years old, the young guitarist is a prolific artist who has put a dozen album out, played with many bands and collaborated with renowned artists like JG Thirlwell form Steroid Maximus and Lee Ranaldo, Sonic Youth. Collector of effects pedals, she fascinates the audience during her live shows, letting them hear the numerous sonic modulations of the guitar, as brutal or subtle they may be. We met her at the end of her concert organized by Sabotage and Why Note in Dijon at Le Consortium. How has been this European tour so far ?

Well this is my 24th show in a row and I don’t know if I would do it again. It’s my longest European tour. I was here last year at the same time of year for 3 weeks, but I did it by train. This time we’re driving through Spain, France, Germany, Belgium, the UK, the Netherlands and tomorrow Switzerland. So much travel ! I’m glad that two shows got cancelled. Everyday meeting new people, new places, different languages, it’s really crazy, you feel like you’re in a dream.

Have you been playing the same set every night ?

Yeah, it’s been pretty similar. Partially because I changed a lot of my gear for this tour because I wanted my pedal board as small and as lightweight as possible. Also because I also had to do some shows where I had to actually fly to. It’s always complicated in the airports, they’re very strict on the planes. I usually use an Ipad and put some synth tracks on there but I decided it would be a lot easier If had a looper pedal that you can import the synth samples onto but I only have 8 tracks on there so my other stuffs I could only have played on my old gears. I can still change it around, depending on how i’m feeling, but it’s mainly the new stuff out of Fantastic Planet. I haven’t got tired of it yet, and feeling more comfortable with it helps you to be more immersed in the performance, instead of focusing on the technical aspects.

Yes, for example I use a volume pedal to do these swells, which is usually the size of my foot, but I got a tiny one for the trip and tonight I lost my place on it and that big sound came up, that’s when I said sorry. Well, it’s never gonna be a perfect show, stuff like that can happen.

So you use samples, different pedals and play live as well, alone onstage. How does it all blend ?

Almost everything is played live and then I loop to build up the song,. What I use that’s already pre-recorded on the pedal is basically stuff I recorded on synth, or my voice on one song that I don’t want to sing live, some samples of the sound of the waves too. I used to make that sound with a guitar using that plastic bubble wrap just by pushing that on a guitar. All the guitar is live, I feel it’s more interesting, more fun for me. Since i’m a solo performer, I want to have a broader frequency range as much as possible. Have the audience get across these really big sounds while they see me on stage and be surprised that it comes from one single woman. That’s my goal with the live performance, I just try to get the right tools to do that.

With the last album Fantastic Planet, it’s the first time ever we see your face on the cover, why ?

I was dating this guy who was a musician but had this big passion for photography. And he was always taking pictures of me. I remember that one time we were visiting my family in Louisiana and I was in a pool, it was a really sunny day and I was floating on a raft. The sun was shining on my face and I thought it looked really great so I was inspired by that photograph. I felt it embodied that notion of fantastic planet, I was really connecting with the elements, it reflected a very happy moment. I really wondered how people would react to that, compared to the other albums, even though it’s not a full on portrait, it’s still a concrete image, a face. I chose that cover right after I did a tour opening for St Vincent and she is on every cover. At the merchandizing I did notice that there really was a connection between her as an artist, and the music and the branding. It hasn’t been the way I have approached things so far so I was wondering if it would make a difference. The album is very moody, are you a moody person as well ?

Yes, I think it’s why I work better as a solo artist even though i’ve played in bands before and sometimes i’ve clashed with them. I like being with people but I do need to be alone a lot. I work well when i’m upset because music is somehow therapeutic. It can be a strength for me, even if sometimes it’s hard on other people. Laugh.

You’re a big fan of Sonic Youth, how was your collaboration with Lee Ranaldo like ?
Working with him was really exciting, we were doing a live performance and he told me he was going to follow my lead and he asked me if I had any notes about how I wanted the show to be like. I felt he was going to follow whatever mood I was going to establish. With any collaboration the key is to listen and try to compliment each other. We’ve tried to do other live collaborations but there’s always something that comes up, I hope we can do it some more in the future.

Is it true that you mostly write while on tour ?

Usually I write stuff when i’m supposed to be rehearsing for a show because I get bored so I start messing around, and I write new things. That happened right before coming to Europe so there’s a new song that I play on the tour. And playing it live, is the best way to workshop things. So when I go back home and i’ll be working on the new album, i’ll record that song first . And because i’ve already played it live, it’s will be easier to make it evolve, the benefit of times …

You used to make short films as well ?

Yes, very experimental short films, that’s what I studied and got my degree in, in university. It’s my visuals you see during the show. It’s kind of a similar approach to the music, it’s pretty abstract. But music is my priority so I don’t have that much time for it.

Yes… it’s been so long since i’ve been able to sit down and watch movies. I like the surrealism a lot and I can watch pretty much anything in the Criterion Collection and feel really inspired. They do special dvd collections of great american, french and italian movies mainly. I do love Jim Jarmusch, I try to watch a lot of contemporary movies, because I’ m really interested in the films’ scores. So for me, when I go and see a movie, I first pay attention to the music.

What music do you listen to while on the road going from a venue to the next one ?

We’re really horribly unprepared, we didn’t bring music with us so it’s been listening to the radio and finding these crazy stations that only play 90’s dance music. Which is really funny so we listen to that, but I brought this one thumb drive that has podcasts on it. We have some german cds as well, that people traded us there it’s interesting that way, it’s whatever comes up.