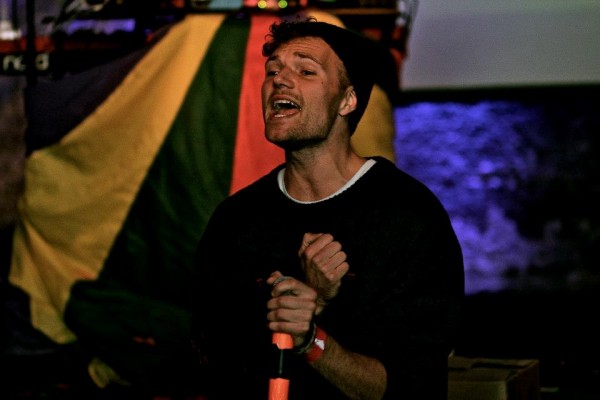 Rich Aucoin is the guy you wish you sister would marry. The 29 years old handsome canadian is an artist who enjoys sports as well as playing charity concerts. We’ve discovered him through « We’re all dying to live », a synth pop album a bit naïve but efficient as hell. But Rich’s true asset is only revealed to you when playing live, because he chose to put the audience first instead of striclty focusing on the music. Every single person at the concert is an actor of the performance through singing, dancing… Most of the time you’ll find Rich in the middle of the audience, jumping around, trying to enlist the most sceptical people. And fair enough, it’s easy to let yourself slip into this world of Youtube videos, both absurd and moving, of well-intentioned motto displayed on screen and glitter throwing. A real do it yourself show, the north american way. He came in Dijon to perform twice during the GéNéRiQ festival, both for kids and drunk adults. We got to meet with him at the Ferronnerie, after his concert for the youngest. In this interview, he talks about the particular nature of his show, his favorite childhood movies and his involvment with different non-profit organizations. How do you make up the text at the beginning of your show with the names of local people on it ?
Hum… Magic. You might be the first one reporting on it. Hum, i think i prefer if you didn’t say how i got them.

The party that’s pretty much your show made me think of Girl Talk’s peformance. Do you agree with that ?
Oh yes, i’ve opened up for Gregg before and kept in touch. I’ve seen him play three times, it’s such an amazing party and such good energy. I definitely share his vision of creating an athmosphere. I’ve seen him play in front of 20,000 people, it was such a great party !

How do you pick all the videos you include in your set ?
The music was actually written to those movies. Like my first EP sings with « How the Grinch stole Christmas » and the second one sings to a movie i’ve made out of clips of four different movies on the public domain. Because Dr Seuss Enteprises Lp sent me a cease and desist so i figured i tried to do a legal sings. I started playing some new songs that are sinked up to the clay animation of Le Petit Prince. But no one really notices that one right now because it’s while we’re under the parachute so…laughs.
But the ones with Charlie Sheen and ghosts screaming are just stuff that i’ve watched. I spend a lot of time on YouTube and friends know that i do this in my show so they always send me links to check out. If i get an idea from it, like the thing i did with Sheen for example : because he always talks about winning so i took all the clips where he says that and i’ve cut it with people doing bizarre yet amazing things like doing backflips in a pair of pants and people jumping over a large gap on a segway. laughs
I also try to find viral videos specific to the country that i’m playing in.

All those videos actually make the music very much secondary, don’t you think so ?
Yeah, well people have said that before because it’s such a different way of presenting your music but I think it’s fine, whatever they think. I choose to present it with these weird context rather than just being « here are my songs, see you later ». There’s a lot of interesting things happening in the songs but that’s wether people can hear that.

I know you bicycled between gigs to raise money for Child Cancer Foundation and then did marathons for the Heart and stroke Foundation. Why that involvment ?
I just want to make a list of every charity and start taking them off and go through everyone of them by the time i’m done.

Why ?
Because it feels good. I think it’s a benevolence. I like playing charity shows too because i got this good feeling of, you’re out celebrating and in addition to your own satisfaction and benefit, you know you’re doing something on a greater whole. Sometimes it’s easy to feel guilty on how good we have it, especially when i’m around people partying and shows all the time. It’s just a way to give back. I know you had a ceisure few years back, when you were 24. Don’t you want to preserve yourself now ? Because it seems you give everything you have during the show… I think i treat every show like it was my last one. I feel healthy so i can give everything and i know my body will bounce back by the next show, with the help of medicine, coffee, drinking. I sometimes chug a bottle of honey when i’m in real bad shape ; it gives you all the sugar and coats your throat.

All the lyrics to your songs and the message you put up on the screen are very much influenced by that « seize the day » , « YOLO » motto, where did ou get that from ?
Mainly from dealing with friends and family’s deaths and having close calls myself wether it was getting hit by a car on my bike in Toronto, almost dying surfing one time. I feel we ignore it, but death is always around the corner so I feel like it’s a good way to live your life. You almost broke something yesterday night where you were holding on to a metal rail… Does this happen a lot ?
Yes, i’ve definitely broken things before. I always go around before the venue and test and make sure it can hold my way, if i’m gonna jump up to something. One time i had a very close call, i climbed up to a balcony and my eye came down on the corner of a table and it just missed my eye, i could have been blinded from that. In Montreal, at Divan Orange I ran accross all the table on the side of the room and each one fell behind me like i was Indiana Jones, so many drinks got knocked over. It was crazy.

In your video clip « It », there are many references to 80’s movies : Ghostbusters, E.T, Topgun… These are very cheesy, childish references…
They’re my childhood favorite movies. Cheesy is a weird way to say it. I still think they’re phenomenal movies, they’re so well made. Top gun is cheesy but Princess Bride rules so much. The way the narrative unfolds is pretty cool.

So you still have that kid’s spirit living inside of you ?
Do you think that’s possible to loose it ? Do you feel that you don’t connect to those things anymore ?

I do but in a different way, now when i watch them i’m most of the times disappointed.
Some do not hold up, i know what  you mean but i feel that my favourites are still enjoyable even as an adult. I enjoy reading complicated philosophy but i love playing video games with my friend. I enjoy going to art galleries but i also enjoy going to water parks. Our parents definitely were being told to grow up faster, that’s also connected to the fact that the age of adolescence has now gone from 18 to 30. Before at 18 you had a job and were about to get married and have kids but now people at 30 try to figure out what they want to do with their carrier and get married and have kids by 35.

Why wait so long between the EP in 2007 and the album that came out last year ?
It just took forever because i started recording it in 2008 but didn’t finish recording it until late 2009 and then it took a year to edit, so i was done by 2010. And then it took another 6 months to find someone to put it out. I went across the country and recorded it individually with 500 people. Production wise, it was always me and somebody else.

Concerning today’s show for the kids, did you do exactly the same thing than yesterday night ?
I didn’t do names because i thought it would be too long for the kid’s attention and i didn’t play one of the songs, because it feels weird playing it during the day (Brian Wilson is A.L.I.V.E). With kids or really drunk adults it works exactly  the same way. Yesterday night most of the people were in the perfect party athmosphere but then they were probably six people that were really hammered. We describe it with my friends as « glazed », they’re super excited but they’re not really paying attention to what you’re doing. Like you ask them to do something and they just start yelling « yeaaaaaaaaaah ». Mostly like the dude who jumped up and almost broke the projector yesterday night. His glazed drop as soon as he realized that he almost broke it. It told him it was the most expensive thing i owned and i suggested for him to stay there and watch and make sure that no one would do the same and he said « totally ». laughs.

Have you ever a done a show where people we’re not reacting at all ?
There’s never been a complete fail… The closest actually was in Nîmes at Paloma, when i walked on stage i realize that i was opening for a folk string band and there was litteraly four people in the room under 40 years old and then 40 to 50 there were 10 people and all the others were older. No one wanted to move that’s for sure and I should have just played all my songs that don’t require any energy from the public.
But instead i just kept doing it and it was funny because they did not get the singing together.

By saying this you do admit that your show is meant for younger people…
Yes, the ideal is 14 to 40 years old as long as they have enough energy. Sometimes i play in seated theater and when i do that the show is completely different.

Are you working on something new ?
Yes, when i come back, i’ll have the next record done. I did two of the new songs actually yesterday night, « Quatre ans de plus » and the parachute one. They’re all going to be like that, fast, energetic tracks.