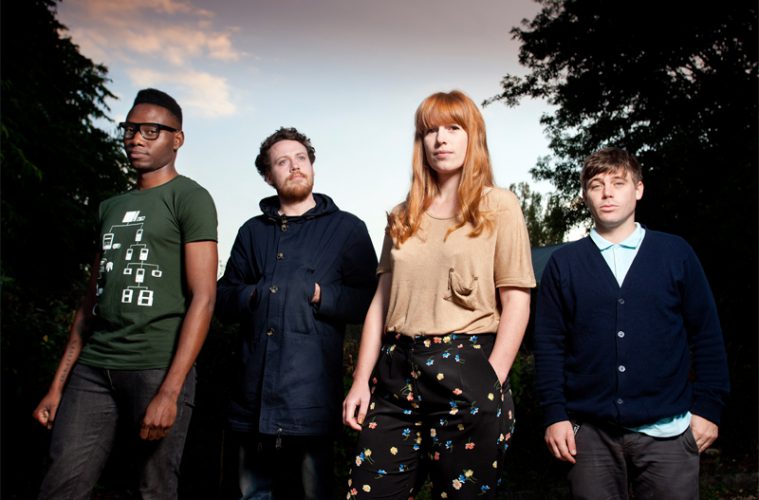 Metronomy, the look of the year

Metronomy has been approved unanimously here at Sparse’s headquarters : we all have a favorite track, and it’s of course never the same one. Indeed all the tracks of this third album « The English Riviera » are hits. And after listening to Pigeon John and his whole band singing « The Bay » while finishing desert at the festival Dièse, we could only face the truth and witness Metronomy taking over the world with their warm soft pop, smoothened by an impeccable electro. The real feat of the band is that they’ve managed to gather various types of listeners  around a simple album at first sight, though filled with nuances. Joseph Mount, leader and founder of the band answered our questions before the concert at La Vapeur (octobre 5th). The almost thirty year old seemed relaxed though he stayed very diplomatic about some questions : you will find no gossip here. Well, actually you will and it’s about James Blake. How are you doing Joseph ?
Very good… very well thank you.

Are you in the middle of the tour right now ?
Yeah, we just finished the UK tour, we have 4 days in France and then we have to travel to America. Non-stop touring. It’s exciting !

I’d like to talk about the production side of your album. Are you still the only one doing the whole producing part ?
Yeah, i mean it’s kind of way that i’ve always worked, so i find it difficult to just give that side of the music to someone else. But the difference with this record is that i was working with an engineer who knows how to use a studio. I know a little bit but i would probably spend a day or so trying to time on the computer.

Is that why the album sounds so clean compared to the other ones ?
I think that yeah, the reason why it sounds like it does is because it was recorded very professionally, and everything i’ve done before has been using the kind of equipment that anyone can buy,  it’s very cheap. So yeah absolutely the difference of the studio makes it sounds so much more kind of warm.

Why do you think you’ve reached such a large audience with this album particularly?
I think on the last records there were really different songs. The only difference is that i tried to be much more like a producer and to make it more simple, and make it more inviting. But i don’t think it’s probably the reason why it has reached a bigger audience. If you put it on your stereo it sounds kind of…. nice (laughs) whereas before it sounded a bit aggressive. I think it’s important that people realize it’s still from the same kind of place you know, it’s still coming from the same person. The only difference is literally the quality of the microphone. There’s no producer, there’s no extra person. How does it have anything to do with the way you felt while writing the album ?
Yeah, of course there was also a part of me that wanted to make a different kind of record. And i guess « Nights Out » was maybe a bit more frantic, had more upbeat songs. And after such an album, you instinctly want to do, not the opposite but something different. It’s definitely more inviting now to people who didn’t get what we were doing before. But it wasn’t an attempt to make more fans or to be more commercial, if no one had bought the record or no one was interested, we’d still be performing it live…

What is that feeling that inspires with this album ? Is it love ? Because you use to say the others were like very much mellow…
I realized that « Nights Out » was much more like a break-up record. And that’s why it was difficult when some people just thought is a « partying « , « fun record », and maybe didn’t understand the emotional side to it. The new record is definitely supposed to be more of a mixture of « being in love » and also kind of « not wanting to write cynical songs ». But i think it’s nice, you kind of need to do these different things.

What about the remixes ? You used to do a lot a them. Are you still going to do some ?
I used to do a lot of remixes when no one really knew who Metronomy was, and when i didn’t really have any money or anything, and there was this fantastic way of keeping yourself eating and also about people hearing who you are. But i really enjoyed making them because you can use them to help your own songwriting. But i guess the more you do the more you realize you are giving away your own ideas and stuff. I’ve been refusing a lot now, yeah, but that’s just because i would like to do more collaborations, more songwriting with people or productions. I might still do some like i did the Lady Gaga one, i mean, why not ?  It’s not something i’ll be much more interested in.

Have you refused a lot of remixes that people wanted to do on the songs on « The English Riviera » ?
I don’t think so, maybe like 1 or 2. I find the whole remixing world is quite funny to me because i never really dj, so i don’t play remixes very often. I obviously like when you get one like the Erol Alkan remix, like you can hear and you’re like « Oh my god this is amazing ». I would be happy if it was the only remix of the album because it’s so good.

So that’s your favorite one ?
Yeah… his remix kind of sounds like i wanted the song to sound. You know what i mean. And because it’s just taking what was already there and made it into a proper house track.

What’s the next step for Metronomy?
It’s America, it’s touring… We already know what we’re doing until April next year and we don’t really have any time off between now and then. When you release a record and you suddenly get more and more fans, i immediatly just want to give them some more music.  But then i guess when things are going really well you have to go and promote so i think we’ll probably just tour for now. Then try to do another record as soon as possible.

I heard you toured with Justice for a while… What do you think about the new tracks that came out ? (Civilization and Audio Video Disco).
Hum, i’ve heard the two and the way i’ve listened to them is probably on my computer because i was watching the video at the same time. I always quite enjoy them. I haven’t been able to imagine what they’d be like in a club. They sound kind of interesting, i would love to hear the rest of the album and see what else is there. I’m not going to say i don’t like it because they’re friends… I guess the one thing that i’ve noticed,  and it’s an observation not a criticism, is that the style of that kind of current french housy stuff, the actual sound changes quite slowly, it sounds a bit like the stuff they did before.

Sounds 2007.
Well maybe… If you were being cynical maybe you’d say it sounds the same but i don’t think it does. I need to listen to it more, i hope it sounds amazing. You know they made a video about the tour in the United States in which they go abit wild. How were they when you toured with them ?
I’m not sure they were how they wanted to be perceived in that movie. We had this really nice time when we toured with them. They obvisouly don’t know that many people in English cities so quite often we would just be hanging out with them. All i remember is them getting towed off everynight because they were smoking in the dressing room. In France you can kind of get away with that but in England it freaks people out. They didn’t do anything that crazy but then i didn’t spend the night with them.

I see you’re wearing a « Calvi on the rocks » shirt, is it from this year’s ?
Yes, we played there this year, it was a mixture of incredible and horrible. When i fly a lot something happens, i think i’m sensitive to air pressure maybe. So we were playing and i didn’t know it but there was a thunderstorm behind us and my nose starting bleeding on stage. It was horrible because you know people are going to assume it has to do with drugs or something. Which it wasn’t. And i was just trying to walk around with my head up and a towel in my nose. But it was a beautiful place.

Who’s according to you the artist/ the album we should keep an eye on this year ?
You’re lucky if you get one. I haven’t really listened to much from a long time….

What about James Blake ?
I think we all probably in the band think it’s kind of « ppfff », i’m not crazy about it. I find it funny because he has quite an affected voice. If he speaks, he speaks like me but if he sings he goes like « ooouuhouuhh » (Joseph imitating James) and i find it a bit odd, everybody loves his voice but anyone can sing like this.

But anyway, i’d go for a friend of mine, it’s called Nazca Lines,  the band of  Michael Lovett and there’s a single called « Compass Point », he’s only young but it’s gonna get interesting. I don’t know, he’s like a male La Roux.

What kind of music is it ?
The production is very much electronic. It’s kind of poppy yeah…

Is England going to win against France for the rugby world cup ?
Whatever, i don’t care. I don’t really like rugby anyway. But i’d like France to win.  The way England is behaving is… I don’t know if it’s beeing reported in France, but the english rugby team is getting into a lot of trouble.